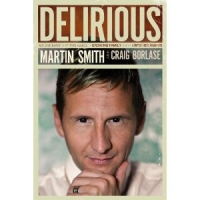 Martin Smith, the lead singer of British band Delirious? who finished at the end of 2009, has written his autobiography. The book, to be published in February 2011 is titled, 'Delirious: My Journey with the Band, a Growing Family, and an Army of Historymakers'.

The 240 page paperback book is published by David C. Cook and co-written with Delirious' long-time author Craig Borlase who also wrote the band's first book 'Purepop?' and has written numerous other books including several with Soul Survivor's Mike Pilavachi.

Last month it was revealed that Martin's wife Anna has written a book, also to be published in February 2011, titled 'Meet Mrs Smith - My Adventures with Six Kids, One "Rockstar" Husband, and a Heart to Fight Poverty'.