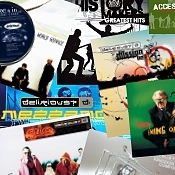 Delirious? return with their new album 'The Mission Bell'. If their previous album 'World Service' was intended to circle the globe with its message, 'The Mission Bell' continues that theme as the band prepare to "Ring the mission bell and storm the gates of hell" [Paint The Town Red]. Pleasing everyone might be 'Mission:Impossible', but with 'The Mission Bell' Delirious? truly reach out an arm and place it firmly around your shoulders with a finely balanced mix of the softly soothing and the raucously rocking. To put it another way, whether your preference is for rock, pop, ballad or worship, you'll find it all crafted into these twelve songs:

Stronger [4:49] - 3/5 stars
"We're getting closer every day, chasing the dreams that heaven gave. Hallelujah here we come"
'Stronger' starts with an eerie string vibration reminiscent of 'Jesus Blood' followed by a simple guitar strum and Martin's voice. The drums join in gently building to a warm melody with trademark guitar, proving from the very first track that Delirious? are back in style. As the chorus takes off, an array of sounds make up the backing track, busy but without being cluttered. As Martin repeats the line "Oh I love you" a choir subtly starts to rise in the background. A well worked opener.

Now Is The Time [4:05] - 4/5 stars [Updated Version]
"The winds are blowing through again, so we must follow, the people daring to believe, we could change tomorrow."
This song has been re-recorded since it originally appeared on a promo CD. Originally it had a fairly slow tempo, but it has now been vastly improved by increasing they rhythm and recording some fantastic pure sounding guitars and drums that open the track. Martin's smoothly sung vocals kick in before the drums increase in intensity and the voice grows in strength, launching into the chorus: "Now is the time for us to shine". The pounding bass and well played keyboard and guitar riffs through out are fantastic. Later the song seamlessly moves into a much faster bridge, "Jesus, Jesus, precious Jesus", accompanied by a choir in the background. Martin then sings a series of urgent sounding lines as the song threatens to take off, followed by a superb guitar solo lasting a full 30 seconds.

Solid Rock [4:33] - 5/5 stars
"There's a tower on a hill, it's always strong it will never shake, it was standing there before the world began"
With a country-fied cowboy style guitar twang that is instantly pleasing to the ear, this song slithers along with an almost blues style to it. The tempo is one of a slow march, until the strongly voiced chorus takes off. "On Christ the solid rock we will stand, all other ground is sinking ground" The slightly distorted almost slow-rap style bridge follows, sung by guest vocalist TOBYMAC. Foot tapping is irresistible and you'll want to join in with Stew as he gets wild with the drums. 'Solid Rock' is one of the highlights of the album and is near perfection.

All This Time [5:24] - 5/5 stars
"All this time since the day I was born, I've never known a time like this. I don't want to let you down"
Martin and Stu share the softly sung vocals. Stu's lines are exceptionally deep and almost electronically sounding at times. It strolls along on a gentle level until the echoing words of "All this time" in the chorus release the song to its faster paced latter half. If the first half was slow, the second half is not so much fast, but alive. The chorus begs to be sung along to and the verses include wonderful lines such as "I can captivate an army but I can't control myself". You can practically visualise Stu stepping on the distortion pedal and coaxing his guitar into life. The song then returns to a more gentle feel, repeating the chorus line over and over but with such a beautiful bass, guitar and keyboard combination that the song refuses to let you lose interest.

Miracle Maker [5:40] - 5/5 stars
"Holy You are Holy, Saviour, Healer, I'm standing at the feet of the Miracle Maker"
Beautifully moving piano and hushed vocals that are raw with emotion announce the start of this musical masterpiece. 'Miracle Maker' is a ballad created the way that only Delirious? can. Almost without you noticing the song suddenly turns into a loud rock track crying out to the Lord. If Charles Wesley had composed rock and roll songs, this is what it would have sounded like. It is without doubt stunning, especially when the soaring guitars give way to the orchestral strings and opera style choir. There is a 'goose bump' moment as Stu unleashes his electric guitar. Investigate meets Mountains High - simply incredible.

Here I am Send Me [4:08] - 5/5 stars
"Let me hear a voice saying 'Who shall I send?', I'll say send me Lord I'll follow You to the end."
This song sets out its stall from the start. Stu opens the singing with fast paced vocals asking God to send a vision like He did to Isaiah and Ezekiel. The words read like a 'who's who' of the bible. In a good-cop/bad-cop technique the singing swaps to Martin for the lighter vocals in the chorus; "Here I am send me". Backed throughout by punchy guitars and rocking drums, half way through it feels like the song is about to explode. Near the end a pounding heart beat accompanies Martin as he continues to sing the chorus.

Fires Burn [4:19] - 4/5 stars
"Jesus won't you take us home? Home is where the heart is"
Beautifully played piano and jungle style drums give this song a gentleness, enhanced by Martin's exquisitely sung lines. The centrepiece is an uplifting chorus which is both simple and catchy. A change in direction occurs when the mixture of guitar and drums is joined by quickly played strings. This is a track the feels much shorter than it is - a clear indication of its ability to consume the listener.

Our God Reigns [5:30] - 3/5 stars
"A hundred million faces staring at the sky wondering if this HIV would ever pass them by"
This song's title might sound like a well known hymn, but don't expect this to be a medley of cover versions. Perhaps the band turned on the TV news when they sat down to write this song, including as many worldly tragedies as they could. Not skirting around controversy they sing about genocide, dieing babies and a "modern day disgrace". Martin sings lines such as "but still my Chinese take away could pay for someone's drugs" and "Nip and tuck if you have the bucks". The defiant chorus says "Our God reigns. forever Your kingdom reigns", standing out against the sins of earth. "God didn't screw up when He made you" Martin tells us. Strings and ebow are allowed extensive freedom in the middle of the song and anger is evident in Martin's voice as he ponders the harsh truth of reality. A notable strength is provided by the choir towards the end.

Love Is A Miracle [3:53] - 2/5 stars
"You've given me everything, Love of my life. Forever I'll sing that love is a miracle"
Moody vocals backed by an equally moody tune, make way for the big gospel choir sound during the chorus; "Love is a miracle, Your mercy catches me when I fall, Love is such a miracle". Towards the end there's even a stereotypical 'preacher man' style sermon extract! It's the weakest track on the album, but is saved by the excellence of the underlying musical tone.

Paint The Town Red [2:15] - 4/5 stars
"You know I feel our city's gonna shake now. And we hear you call every woman and man, "Ring the mission bell" and storm the gates of hell."
Part punk-rock, part brit-pop, 'Paint The Town Red' is sung with an urgency and is unlike any song Delirious? has ever performed before. The almost boisterous chorus of "ohh here we come, here we come, here we come" rings out like a football chant. The song comes to a standstill as a metallic guitar strums, before the ohh's return in the background as the screaming guitar continues. By far the shortest song on the album, it buzzes around your head all day long. "Ring ring ring ring the mission bell. Sing sing sing we've got a story to tell" shouts Martin as if he is hyperventilating.

Take Off My Shoes [6:27] - 3/5 stars
"Why did You call? Why did You wait, for someone so guilty someone so fake?"
Opening with echoing simple guitar notes then a gentle beat and slowly played piano, there is nearly a full minute introduction before Martin starts to sing. This is a modern day hymn with a stunning simplicity. "So hold me, blow all the pride from my bones with Your fire" calls Martin in the chorus. This song is almost a minute longer than any other track, allowing for a Delirious? 'jamming moment' when guitar blends with drums, bass melts into keys and Martin's smoothly uttered words create a moment to marvel.

I'll See You [3:46] - 3/5 stars
"I see You when the wind blows, running without fear. Born to rest in your Father's arms."
A simple acoustic song, combining the styles of Majesty and What A Friend, with an early U2 flavour added in for good measure. A faintly sung female voice gives a mellow Enya feel to the song as it gently bringing the album to a close.

Synopsis
Is it the best Delirious? album yet? It's difficult to say. It is incomparable to the likes of King of Fools, Mezzamorphis or Glo. Those albums were landmarks of their day, but The Mission Bell is set in a different time and demonstrates a different set of skills. Maturity oozes from every pore on this album. In 2001 Delirious? declared that their Audiolesson was Over, but with The Mission Bell they have truly graduated. The album plays to every strength the band has developed over the past decade together. With it's great use of strings and choirs, trademark guitars, bass and roaring drums and a stronger emphasis on the piano, this is a whole new side to Delirious? that shows progression to a greater level. Martin and Stu's vocals are the finest yet. Stand out tracks are probably Solid Rock, Miracle Maker and Here I Am Send Me, but All This Time and Fires Burn are not far behind. In the opening song, Delirious? sing "We're getting stronger every day" and they're not wrong.